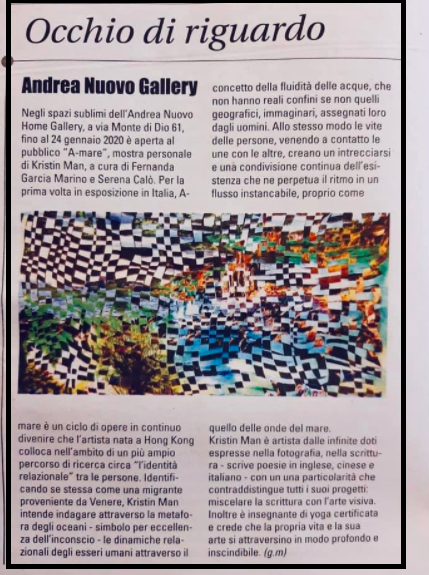 To connect on IG

Kristin Man, A-mare. Photographic sculptures of a world without borders

On display at the Andrea Nuovo Home Gallery, photography becomes a means of experimentation to investigate the perception of places between sea and land by removing borders ... not only geographic

Kristin Man was born in Hong Kong. She holds British and Canadian citizenships. She consecrates her work on relational identity "by investigating the concept that the fluidity of our oceans symbolizes the fusion of sorts and our unconscious into a single flow".

She is a photographer of her own kind and a "user of photography".

Kristin Man citizen of the world

The first time I met Kristin Man, it was at the opening of an exhibition in an art gallery. She was in the company of a mutual friend. After a few seconds that we were introduced, she asked me if I wanted to go to a party in Capri the following Sunday. [in reality “the party” was actually my book presentation on “9_9” at Andrea Ingenito’s Gallery in Capri at that time]

I didn't know who she was but over time I understood the meaning of that invitation: it is his way of seeing life, his way of relating to the community of humans. Universal, without borders. Neither geographic, nor race, nor sex or religion or social status: the world is made up of people. Period.

The Photography of Kristin Man

Kristin Man, thanks to her being "out-border", beyond the borders, for A-mare she used photography in an unusual but appropriate way to the concept of the works.

I believe that we are going through a transition phase in which photography has all the conditions to become something else, developing multiple communication potentials through new ways of operating.

A bit like when photography was consolidated in the 19th century and painting could no longer have a purely documentary purpose, starting to bypass its now obsolete rules. From Impressionism onwards.

And I believe that it is not even a question of simply wanting to make art when the usual methods of the photographic medium are kept in the margin. As in all the transition phases, there is research and experimentation. The artist is the experimenter, the individual who can open the doors to new opportunities when the scientist, the technologist, do not get there.

Kristin Man is a photographer who understood this. Photography becomes for her the means and not the end. The means to trace that relationship of relational identity by adopting experimentation.

A-mare, the seas of the world lived by Kristin Man

Kristin Man is a citizen of the world and her being always traveling between one continent and another, can only benefit her creatively as it is a receptor of inputs of different cultures and visions.

Its intimate matrix has preserved that typical oriental culture which in our imagination reminds us of what puts body and mind in synergy. On the same wavelength. A system where everything is connected.

Whether it is the meaning, the art of origami or the oriental philosophy, the "cause and effect", the Yin and Yang balance or certain typical Chinese games, by observing the works of Kristin Man we are brought back to these contexts.

A-mare is an overlap of sea and landscapes around the world. Interweaving of places from all continents. Planes with curved stripes, recalling the waves of the sea, which blend together as could be the dreamlike and perceptive fusion of our memories. The unconscious overlaps what we are unable to focus on in our memory.

It is a demolition of not only geographical but temporal boundaries. The day and the sunrise coexist in the same frame, the waters of Marechiaro and the forests of Canadian fir trees intercept.

A-mare is a philosophy of life, the mutual influence of social relations. A way of expressing the existence of the reciprocity of things.

With her manual artisan skills, Kristin Man has created works that are handcrafted, in the best sense of the term.

In the gallery you can see the matrices of some tapestries printed on plush fabrics made with the recycling of plastic bottles from the sea.

Other works are photographic sculptures, some enclosed in plexiglass cases, the depth of which depends on the “sweetness” or otherwise of the sea waves. For a stormy sea, the intertwining of the curvilinear stripes is more tangled and protruding towards the observer.

A stand for clothes collects kimonos and other accessories that reproduce the images of Kristin Man.

And, last but not least, a bed with a canopy-like adorned and covered with A-mare style fabrics titled “Seabed of Unconscious”, with reference to Carl Jung. It is a bed/sofa not only to look at but to try, with friends, for that free, boundless sense of which Kristin Man, a "migrant from Venus", consecrates herself as a universal ambassador of hospitality and human relations. 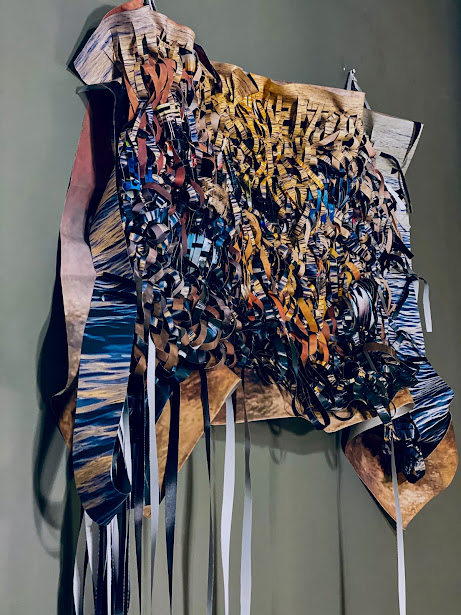 Translation from the review article authored by Luca Del Core https://www.senzalinea.it/giornale/a-mare-la-fluidita-del-mare-nellarte-di-kristin-man/originally in Italian on my solo show Oct 2019-Jan 2020:

The term "A-mare", understood as "A mare", complement of motion to place, or "Amare", voice of the verb "to love", might seem a simple play on words. In reality, it has a much deeper meaning: it is a path of research about "relational identity" between people, in which the artist Kristin Man intends to investigate through the metaphor of the oceans and the fluidity of the waters. Her works are a visual and tactile transposition of these relationships, in a historical period in which Anthropocene is one of the most important themes of today's society. The sea becomes a medium, a tool to express relational dynamics, summarized in the equation: relationship (flow) / society (ocean), and individual / identity. The lives of people, coming into contact with each other, create a continuous intertwining and sharing of existence that perpetuates its rhythm in a tireless flow, just like that of the waves of the sea. From these reflections, the interesting exhibition set up in the rooms of the "Andrea Nuovo Home Gallery", in via Monte di Dio 61, in Naples, is inspired by the title "A-mare" by Kristin Man, curated by Fernanda Garcia Marino and Serena Calò, until January 24, 2020.

The body of works is characterized by a series of photographs broken down into strips, filaments and patterns, where the synthesis turns out to be the creation of tapestries printed on different materials: paper, silk and fabrics obtained from the recycling of plastic bottles from the sea itself. Through a skilful use of materials, the artist gives her works a certain three-dimensionality, highlighted by the swirling waves that drag the user towards an indefinite world, where the return to reality emerges from the individual details disseminated in the snapshots. The relational dynamics of human beings through the concept of the fluidity of the waters have no real boundaries, except the geographical, imaginary ones assigned to them by human beings. In fact, Man transposes the topics dealt with in philosophy and social psychology into art, she is the architect of an interesting "vision", of a world without barriers, in which culture overcomes any opposition. This issue has been taken up several times by intellectuals with different outcomes, particularly when it comes to the "state of nature", that hypothetical condition in which men are free and subsequently disciplined by a governmental apparatus and related laws, typical instead of the rule of law. This particular condition of the individual was hypothesized by the English philosophers Thomas Hobbes and John Locke and, subsequently, by the Swiss Jean-Jacques Rousseau with different characteristics. If for Hobbes the state of nature is a war of every man against all the others, for Rousseau, however, human beings live it in a "free, healthy, good and happy" way. Man overturns these points of view through the metaphor of the Butterfly effect: a simple movement of air molecules generated by the flapping of the wings of the butterfly, can cause a chain of movements to trigger a hurricane, perhaps thousands of kilometers away. It is an exhortation of mankind, to go beyond their cultural limits, proposing a new model of society and relationship.

Walking through the rooms of the home gallery, you come across visually impacting works, where the contours of the figuration fade into abstraction, returning a fragmentation rich in motifs, juxtapositions and overlaps. Observing "Moonlight Sonata", some elements emerge that refer to optical art, of a graphic art, based on a rigorous definition of the operating method. Through lines placed in different modular and structural grids, Man induces the user in a state of perceptual instability: she takes up the themes of the Bauhaus and De Stijl research, and that concreteness of Kinetic Art and Futurism, with the aim of not to dwell on pure visual or aesthetic values, but to bring out the philosophical, intellectual and environmental content.

A fundamental role in understanding tapestries is the use of colour, linked to the sea, nature and the psyche. In "Oppositional Complements”, light and matter merge. It is a work characterized by an intense chromatic range that recalls the psychedelic images of some cinematographic frames of "Inferno" (1964) by Henri-Georges Clouzot, with Romy Schneider and Serge Reggiani, in which there were several innovative lighting techniques and practices of Andreas Winding and Armand Thirad. The rotating lights were positioned in front of the camera and the actors and the final effect created an illusion in which the transition between emotions and personalities of the protagonists emerged. With her photographs, Man manages to recreate dizzying environments that shake perception.

In the role of a weaver, the artist transforms and brings out new forms and contents from visual and tactile patterns, using a sort of unwritten code woven on the surface. Her anthropological and sociological approach finds photography the ideal tool for expressing content of considerable importance. Using materials obtained from the recycling of plastic, Man has created its own line of haute couture clothing visible in another room of the homegallery.